She is named by friends in the showworld as 'Snowflake'. At home she is called 'Mufih'. 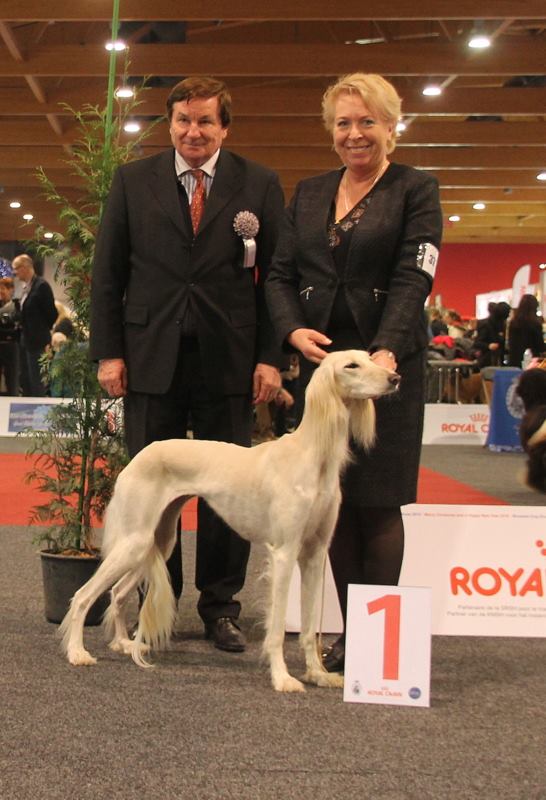 Mufih started her showcareer as a rising little star, powered by her will te be close with her owner and handler and to make her happy, she was very succesful in the show and collected an impressive list of titles.

Mufih started with a participation in Baby Class in Belgium and she acted as a pro. Her second show was in Puppy Class in Aarau Switzerland and she went right away to Runner Up Best In Show Puppy. In San Marino she became Best Junior in Show and then she made a big surprise: at the age of 9 months she became in Amsterdam two times Best Bitch with two different judges and she received the title of Amsterdam Youth Winster and Amsterdam Winster on the same day, followed by a Best in Show Junior 3. From there she went on and on winning many BOB's and Group 10 placements.

Mufih is a pleasure to show, she acts like she has nothing to do with the whole circus, but in the ring she knows what must be done, she shows herself proudly and she knows when she wins.

Mufih also received her Coursing Licence in Switzerland, but she thinks it's a stupid thing to run behind an artificial or dead rabbit. She prefers to run with her little horse friend in the pasture.

Yoth Champion of the Netherlands

Champion of the Netherlands

Certificate of Admission to breed

Mufih lives a Naturopathic Lifestyle in perfect harmony with nature. Her home is a farm close to three Natural Reserves. She shares her pasture with the Spannish stallion Cayman, she shares her garden and forest with her little horse friend Caramel and she shares her home with the Ragdoll Cat Avalon.

A diet appropriate for Carnivores: Raw meat, organs and bones

Mufih was vaccinated and dewormed by the breeder before she came at my home. She is detoxed from vaccines and chemicals and receives only vaccines that are required by law.

Great recourses on side effects of vaccines are: How to immunize your dog without vaccines by Aleksandra Mikic and Mark of the beast hidden in plain sight by Dr Patricia Jordan.